The Institute of Sociology at Goethe University Frankfurt numbers amongst the most important worldwide and is today also the second largest of its kind in Germany.

Sociology in Frankfurt was founded in 1919 and has been known worldwide since the 1920s through the „Frankfurter Schule“. It was the centre of the 1968 Revolution and today builds on its strong tradition and international location, reinventing itself for the 21st century.

The Institute of Sociology networks with other intramural and extramural players. It works closely with the Institute of Political Science, the Department of Human Geography at the Faculty of Geosciences and Geography, the Sigmund Freud Institute, the Institute for Social Research, the Cornelia Goethe Center for Women’s and Gender Studies, the Institute for Economics, Work, and Culture, (IWAK – Institut für Wirtschaft, Arbeit und Kultur) the Center for Leadership and Behavior in Organizations (CLBO) and the IDeA Center (Individual Development and Adaptive Education of Children at Risk) as well as the Institute For Social-Ecological Research (ISOE – Institut für sozial-ökologische Forschung).

The sociology studies at the Goethe University of Frankfurt are guided by the idea of communicating social science thinking and research in its breadth both on the basis of theoretical considerations and empirical studies. Students of sociology in Frankfurt are to be enabled to understand, analyse and explain complex social problems from different perspectives.

Our Professors introduce themselves

The History of Frankfurt Sociology

The History of Frankfurt Sociology

Although teaching at Goethe University Frankfurt only officially began in October 1914, in the 19th century Frankfurt on the Main was already the scene of a large number of social science research institutions and activities. In the period 1879 to 1890, for example, the city was permanent host to meetings of the traditional Social Policy Association (Verein für Sozialpolitik). Furthermore, numerous studies were conducted at that time in the framework of the Political Economy Section of the Free German Academy (Freies Deutsches Hochschulstift), which aimed to investigate and evaluate the living conditions of workers in Frankfurt under consideration of social and statistical data.

In 1890, Wilhelm Merton, a Frankfurt industrialist, founded the Institute of Public Welfare (Institut für Gemeinwohl). This institute was not only an umbrella organization with the task of coordinating in an academically sound and reliable manner the work being performed by various social welfare institutions in Frankfurt, but also an important step in the career of young researchers such as Leopold von Wiese, Othmar Spann and Philipp Stein, who later played an important role in sociology in German-speaking countries. In 1901, the Academy of Social and Commercial Sciences, (Akademie für Sozial- und Handelswissenschaften), which developed out of the Institute of Public Welfare, was established in Frankfurt. This was the starting point for Goethe University Frankfurt founded in 1914, where it became the “Fifth Faculty.”

It was no coincidence that in October 1910, that is, four years prior to the University’s foundation, the first congress of the German Sociological Association (Deutsche Gesellschaft für Soziologie) had already taken place in Frankfurt, the home to economic and social science education and research. Amongst the speakers and discussants at this congress were such renowned sociologists and scholars as Georg Simmel, Ferdinand Tönnies, Max Weber, Werner Sombart, Hermann Kantorowicz and Robert Michels. What was particularly special about the congress was the fact that with Henriette Fürth, a local Frankfurt politician of the Social Democratic Party, publicist and women’s rights activist, who also participated in this founding congress of the German Sociological Association, a woman too was actively involved for the first time in the institutionalization of sociological research and teaching in German-speaking countries. It was Wilhelm Merton too who invited the delegates of the First German Sociologists Conference on the opening day and following Georg Simmel’s lecture on the »Sociology of Sociability« to a convivial get-together at the premises of the Academy of Social and Commercial Sciences.

Sociology in Frankfurt during the Weimar Republic

In the following years too, the City of Frankfurt was once again able to consolidate its position as one of the leading locations for social science research and teaching in German-speaking countries after teaching commenced in October 1914 at Goethe University Frankfurt. A real novelty in the German university landscape at that time was the fact that the University also already had – since its very foundation – a Faculty of Economics and Social Sciences, which was soon to play a central role in the institutionalization of sociology in Frankfurt. After all, there were already plans in 1914 to establish a full professorship for sociology at this faculty, which was, however, initially prevented by the outbreak of the First World War.

After the war, the first German chair for sociology was set up in 1919 at Goethe University Frankfurt, sponsored by Frankfurt consul Karl Kotzenberg and first held until 1929 by Franz Oppenheimer, liberal socialist and pioneer of »Rhenish Capitalism«, who was followed by no less than Karl Mannheim who came from the University of Heidelberg. With Max Horkheimer, who in 1930 took charge, after the withdrawal of Austro-Marxist Carl Grünberg, of the Institute for Social Research (Institut für Sozialforschung) – founded in 1924 thanks to an endowment from Hermann und Felix Weil, who since 1930 held a chair for social philosophy at the Faculty of Arts and Humanities at Frankfurt University, and Karl Mannheim, representatives of a unique academic culture of debate already forming at that time were active in Frankfurt, which after the Second World War was to leave its mark for decades on intellectual debate in the field of sociology. Furthermore, philosopher, sociologist and journalist Siegfried Kracauer, as editor of the Frankfurter Zeitung newspaper, also contributed in the 1920s to raising Frankfurt’s visibility and helping it assert its claim as the leading scene of Weimar sociology. In the period from 1930 to 1933, Norbert Elias worked in sociology research and teaching at Goethe University Frankfurt as assistant to Karl Mannheim and was listed in the framework of a reparation agreement as Professor Emeritus for Sociology at the Faculty of Social Sciences in the lecture timetable of Frankfurt University from 1976 onwards until his death.

After the Second World War, in 1946 the first sociology congress in post-war Germany once again took place in Frankfurt am Main at the instigation of the American occupying forces. The return of Max Horkheimer, Theodor W. Adorno and the Institute for Social Research from exile in the USA is also due to decisive efforts by the occupying powers to establish not only political science but also sociology for the establishment of a stable democratic community at West German universities in the western zone as part of »Reeducation«.

Philosophers and sociologists Horkheimer and Adorno had already returned to teaching at the Faculty of Arts and Humanities of Goethe University Frankfurt since the 1949/50 winter semester. It was they who from that time on were to leave their mark on the “Frankfurt School of Sociology”. It is also thanks to Horkheimer and Adorno that already in 1954 the first diploma study programme in Sociology in German-speaking countries was established at the Faculty of Arts and Humanities at Frankfurt University. After its return from exile, the Institute for Social Research, which had already become part of this faculty in 1930, played a central role under the leadership of Horkheimer and Adorno in the institutionalization of sociology research and teaching in West Germany up until the outbreak of the student movement in 1968.

Since the beginning of the 1960s, sociology found a home too at the Faculty of Economics and Social Sciences through the establishment of corresponding chairs at which, in addition to Walter Rüegg, Friedrich H. Tenbruck, Thomas Luckmann and Wolfgang Zapf were also professors. In 1964, philosopher and sociologist Jürgen Habermas was called to the dual chair for Philosophy and Sociology at the Faculty of Arts and Humanities of Frankfurt University as successor to Max Horkheimer. After he was called to Frankfurt, Habermas, by contrast to Horkheimer and Adorno, was no longer a member of the Institute for Social Research. In addition, in 1966 Ludwig von Friedeburg was appointed professor at the Faculty of Arts and Humanities in Frankfurt at a chair dedicated exclusively to sociology. In this respect, these two faculties played a central role in sociology research and teaching in Frankfurt up until 1971 when the new faculties were established. Friedeburg’s chair was assigned to the new Faculty of Social Sciences established in 1971. Following his position as Hesse’s Minister of Education, Ludwig von Friedeburg was acting director of the Institute for Social Research until 2001 and honorary professor at the Faculty of Social Sciences of Frankfurt University up until his death. From 2001 to 2019 social philosopher Axel Honneth held the position of the institute’s director.

Sociology in Frankfurt since 1968

In addition to the Institute of Sociology newly established in the spring of 2013 at the Faculty of Social Sciences, the Institute for Social Research continues to shape now as before the current profile of sociology in Frankfurt. In 1987, the first chair in Germany for women’s and gender research was set up at the Faculty of Social Sciences in Frankfurt too and held until 2004 by Ute Gerhard. This professorship is today also part of the new Institute of Sociology. The Cornelia Goethe Center additionally plays a central role in contemporary sociological women’s and gender research in Frankfurt. 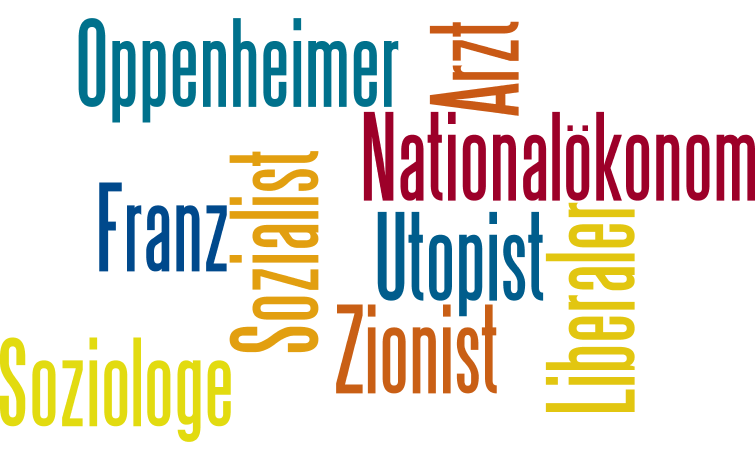 Press Commentaries on the Anniversary

Press Commentaries on the Anniversary 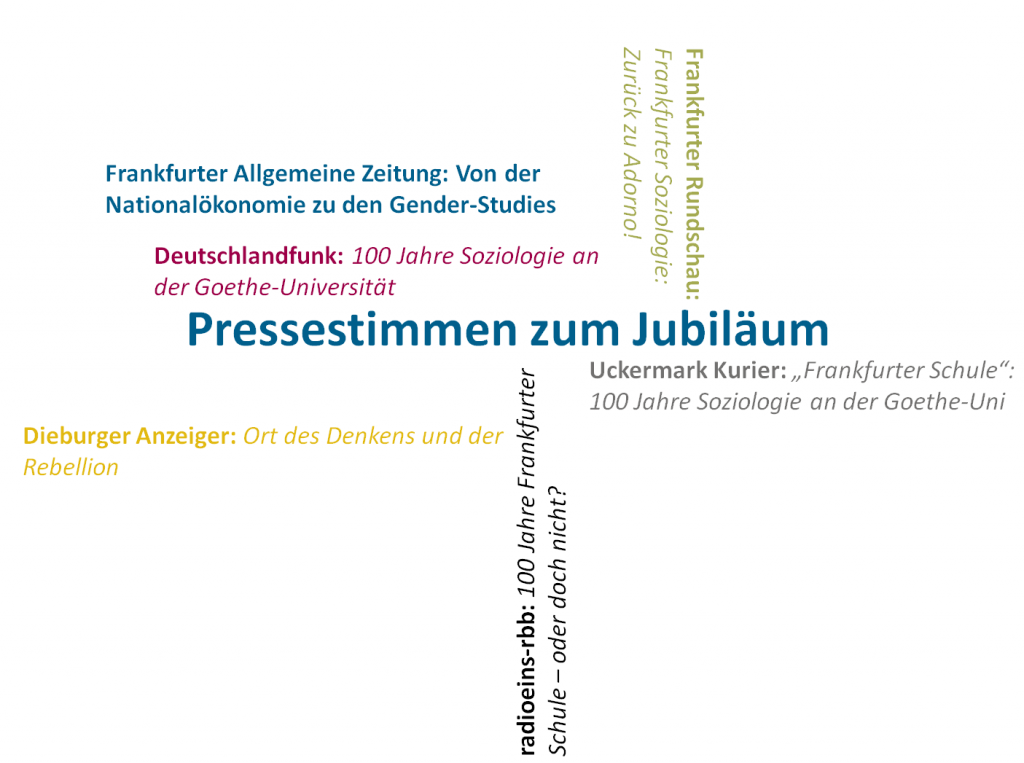